Ralph Ellison originally speaks of how music affected his living experience in NYC negatively. He was surround by people on all sides of his apartment that made too much noise for him to concentrate.

I think when he said “In those days it was either live with music or die with noise…” he meant you either created your own sounds to drown out the noise or you spent your time listening to others noise.

In my personal experience there’s a distinct difference between “hearing” and “listening”. Hearing is something done involuntarily. It’s the noise that’s all around us in our everyday lives such as cars passing by, sirens, rain hitting the window, etc. Listening is something done actively, this means you’re giving your attention and focusing on a sound and trying to understand it’s meaning. I certainly believe we make choices about what we actually listen to, I can turn on the TV and focus on a different task. Even though I “hear” the TV, that doesn’t mean I’m actively listening to it. The criteria used is by prioritizing what’s important to us, is it something worth listening to. Structural features such as race, gender, or social class do matter to how we listen, for example if the president is giving a speech on tv, you’re more likely to see a lot of people actively listening to that rather than something going on around them.  Schafer and Krukowski discuss there is a relationship between sound and space. In NYC specifically because of technological advancements and growth, the city gradually became loud. Nowadays people listen to music on their headphones to block out the sounds of the city because it wasn’t something they wanted to hear.

According to Berger, the act of “publicity” or advertising is the essentially trying to get consumers to imagine an alternative way of life to influence them, that we can change ourselves and our lives by buying something more. This is significant because it leads consumers to believe they are in some way richer, even though they are getting poorer.

Berger argues that though oil paintings and photography are similar, oil paintings are an act of art while publicity photography is an act of commerce. Oil paintings “showed what the owner was already enjoying among his possessions and way of life;” “it enhanced his view of himself as he already was.”  Publicity on the other hand, “appeal to a way of life that we aspire to or think we aspire to.” These differences are important, oil paintings enhanced the subjects view of themselves because it showed facts of their life. Publicity photography suggests that if we buy whatever it is offering, our lives would be different from what it currently is, but it can only be achieved if we have the money.

One of the dreams he offers is the dream of later tonight. The images used in the advertisements manipulate consumers by allowing the consumer to hold onto the promise that with money you too can be surrounded by the greatest pleasures. The images depict groups of people smiling and laughing, all very well dressed, with drinks in their hands. It brings about the illusion that money and happiness are one and the same.

Greetings everyone, my name is Grzegorz Bielen but feel free to just call me Greg. I’m originally from Poland but I’ve been living in New York City. I’m a US Army Veteran, had the pleasure of traveling around Europe. I’m currently majoring in Network Administration & Information Security. Outside of school I enjoy playing video games with friends, snowboarding, and painting (not that I’m any good at it). I recently got into self-help books and i’ve been enjoying them. I look forward to spending the semester with you all. 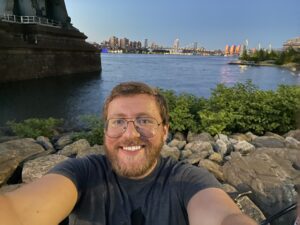 If you want to add yourself to this blog, please log in.

Except where otherwise noted, content on this site is licensed under a Creative Commons Attribution-NonCommercial-ShareAlike 4.0 International license.

Need help with the Commons? Visit our
help page Send us a message

Built with WordPress Protected by Akismet Powered by CUNY